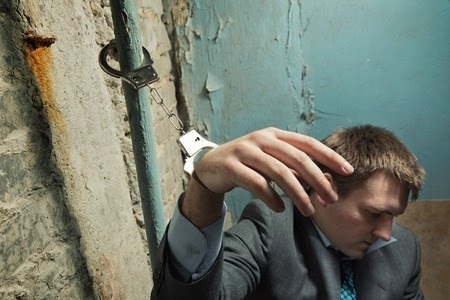 I found them online. Searching forums and chat rooms, message boards and alt groups. It took a while, but it was worth it. They were cheap; the website was called "Satisfaction Guaranteed". Within days, business owners Krager and Stark pulled up in my drive. They just nodded at me as they got their worn black satchels from the back of an enormous black SUV. We walked in silence to the house; I held the front door open for them and we walked into the living room.
"Nice place... ah...Ms. Smith." Stark said as he looked around appreciatively. I had no fear he was casing the place; petty theft wasn't in his repertoire.
"Yeah, thanks. Um... he's downstairs, sedated like you suggested. I had a hell of a time getting him down there." They exchanged glances as I led them down the hall to the basement door. I slid the dead bolt back, and slowly opened the door, waiting to see if either of them went first. Neither of them did, so I headed down into the damp coolness of the finished basement and they followed carrying the tools of their trade slung over their shoulders. I wondered exactly what the big black bags contained. Rope? Duct tape? Chains and saws? Knives? An ax? I shuddered. Maybe I wasn't up for this after all. I just wanted to teach him a lesson.
Stark got to the bottom of the steps and waited. "Well we'll knock off a few bucks for that. You've already done the hard part for us, you'd be surprised how many people don't have the stomach for this. And the fact that you're sticking around for the main event, lady I'm impressed. Are those the magazines?"
They were rolled up in my hands. I looked down at them and shook my head.
"Yeah just two of them. They look well used, I figured they must be his favorites. Is that what you needed?" I had no idea why they wanted to actually see what he was looking at. Wasn't it enough that I told them about it? I'd almost burned them.
Carl was on the concrete floor in the corner; I'd propped him up against the cement wall and he was slumped over. Stark walked over to him, dropped his satchel then took his foot and pushed Carl away from the wall. He fell over hitting his head on the floor. I caught my breath, what if it had cracked his skull? I turned to go back upstairs. This wasn't what I'd wanted.
Stark called out, "Handcuffs? Nice. You really were ready for us, weren't ya?" He snickered and glanced at Krager who was lighting a cigarette.
I wanted to tell him I didn't allow people to smoke in the house, but that somehow seemed ridiculous under the circumstances.
I nodded my head and started up the stairs.
"I'm gonna get something to eat." I called back over my shoulder. There was only silence. I left them to their work. I didn't want to see it, I just wanted results.
Six months ago I'd found out my husband had a pornography addiction. Magazines and DVD's, internet chat rooms and twice he'd paid for personal performances from some stripper website. He'd paid over $600 dollars for one of those shows. I looked at the date, it was the day after our anniversary. The one where he'd said he didn't have the money to get me a "nice" present. We'd been married 12 years. I was heartsick and in shock. He'd never shown any interest in anyone other than me. Things had always been... good in that department. Or so I'd thought.
At first I cried. Then I'd decided to leave him. Then I got angry. Really angry.
He had humiliated me. He had lied to me; kept his secret life... well secret. I wasn't going to take this lying down. I thought of all kinds of vengeful scenarios... but all of them involved degrading myself in some manner and I refused to sink to his level. I wasn't about to have a revenge affair just to even the score. He needed to be humiliated back. Now I was the one going online, visiting chat rooms. But I was collecting information. With a few phone calls and for a little more than what Carl's stripper shows had cost, I was going to get satisfaction. Guaranteed.

A week later I was sitting in the diner across from Carl's office downtown. I looked up at Stark and he grinned a surprisingly perfect smile. He was very pleased with himself. He pushed glossy photographs across the table. They were fanned out and I could clearly see the look of humiliation on my husband's face. I remembered the layout from one of the magazines. Red high heeled pumps, ripped fishnets and a corset. Only in these photos, it wasn't a buxom brunette wearing them, it was my husband; in full make-up and he was bound and gagged. They had put him in the position of the poor unfortunate girl from the magazine. He needed to see how it felt to be objectified and used, and from the looks of it, he had. I still wasn't quite sure what all they had done to him. I never asked, and he never said. But I was pretty certain it had worked. Stark seemed anxious to give me details, but I didn't ask him either. Something deep within me told me that I really didn't want to know.
The waitress approached to refill my coffee and I moved the manila envelope to cover the pictures. Stark smiled again and looked up at the waitress. She winked at him and took forever to refill his cup.
When she'd finished and walked away, I picked up the photos and put them back in the envelope. I didn't want to see them. It was embarrassing. Now that my initial anger had dissipated, and my husband had been punished, I saw no need to further my relationship with Stark and his associate. I took a fat white envelope from my purse and laid it in front of him to conclude our business.
"That should do it." I spoke softly and took a sip of my coffee.
He picked it up, looked inside and nodded.
"Well Ms. Smith, if it doesn't, you know where to reach me. Oh, and we do keep negatives on file, just in case. That was in the agreement."
"Yes, I know. I don't think there will be cause for anything further. He has been a changed man ever since."
"Oh yes ma'am, I'm sure of that. Once is usually all it takes. But we have had instances..."
I interrupted him, "I have your number."
I took the pictures and got up from the table. I wouldn't need to call them again. I was going home to a candlelight dinner, flowers and soft music, and my husband waiting with a glass of wine in hand. He was back, the man I'd married all those years ago.
Yes, he had learned his lesson, and I'd learned mine.